Born in 1953, Malcolm Goodman was educated at King's College School in Cambridge and Kelvin Hall School in Hull, and subsequently undertook formal instrumental studies at the Royal College of Music in London, gaining an ARCM performer's diploma on the horn in 1975. His musical studies followed in the footsteps of his father, Peter Goodman (Hull City Organist and music teacher), mother, Mary Goodman (peripatetic violin teacher), sisters Wendy (cello) and Jennifer (clarinet) and brother Roy Goodman (violin and orchestral conductor), who had all previously studied at the Royal College of Music.

Malcolm Goodman began his professional career in 1975 with the Central Band of the Royal Air Force at RAF Uxbridge. However, in 1979 he left the Royal Air Force to undertake a new employment opportunity in the East Midlands, whilst also pursuing a career as a freelance musician and the voluntary role of Special Constable with Nottinghamshire Police.

In 1990 he returned to his former Royal Air Force career, becoming principal horn with the Western Band of the Royal Air Force at RAF Locking (Weston super Mare). During the 1991 Gulf War he was deployed on active service with other RAF musicians in a new operational 'war role' in field hospitals at various forward operating bases in Saudi Arabia, and was subsequently awarded the Gulf War, Saudi Arabia and Kuwait medals.

With members of the Western Band of the Royal Air Force, Malcolm had the privilege of travelling with Her Majesty Queen Elizabeth II to provide musical support for her 1996 State Visit to Thailand.

Malcolm Goodman retired from the Royal Air Force in 2007, having been appointed as Music School Manager at Uppingham School in Rutland, managing the music department administration within the school’s new £3.5m purpose built music school.

In the additional role of Concert Tour Manager, he also organised various overseas tours for choirs and orchestras around Europe, the Far East and USA, also taking the Uppingham School Chapel Choir to perform a leading role at the Royal Albert Hall for the Royal British Legion Festival of Remembrance in 2011.

Following the reorganisation of the Uppingham School music department in 2014, Malcolm retired from full time employment to devote more time to his other musical and voluntary activities.

As a founding trustee of the National Association of Youth Orchestras, in 1979 Malcolm became the Honorary Course Administrator for the Anglo-German Youth Music Week - a role he continued for 20 years until it was superseded by the European Youth Music Week in 1999.

In the 1980s he also served as a member of the Consumer Standards Advisory Council for the British Standards Institute. 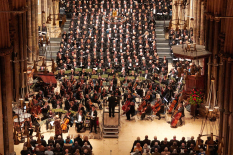 In 2001 Malcolm founded the Lincolnshire Philharmonia Orchestra based at Royal Air Force Cranwell to further develop musical links between Royal Air Force musicians and the local community, and in 2003 established the Lincolnshire Chamber Orchestra as a new professional orchestra for the region. In 2014 he also co-founded the Newark Young Sinfonia as a new opportunity for young musicians of all standards in the local community to enjoy the experience and opportunity of playing in an orchestral ensemble.

Local community activities also included a 12 month appointment with the Sleaford and District Twinning Association and the appointment as a charity trustee for the Sleaford Concert Band - organising their subsequent concert tours to Berlin, Paris and Barcelona. 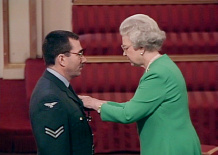 Working closely with the broadcast media, in the 1980s Malcolm was a consumer advisor to the BBC Watchdog programme, and in later years undertook the role of deputy presenter for the 'Music Link' programme on BBC Radio Lincolnshire. In 2006 he was also appointed to the BBC Regional Audience Council on a 3-year advisory position to the BBC Trust, and is now routinely interviewed on BBC radio and television in connection with his RAF charity concerts.

In March 2020 Malcolm established the Musicians' Virus Forum as a discussion group for freelance musicians during the COVID-19 outbreak. Now renamed the Musicians' Forum the group provides a general platform for advice and support for the musical community.

Malcolm Goodman was awarded the MBE by Her Majesty Queen Elizabeth II at Buckingham Palace in 2001 for services to youth music and the Royal Air Force.